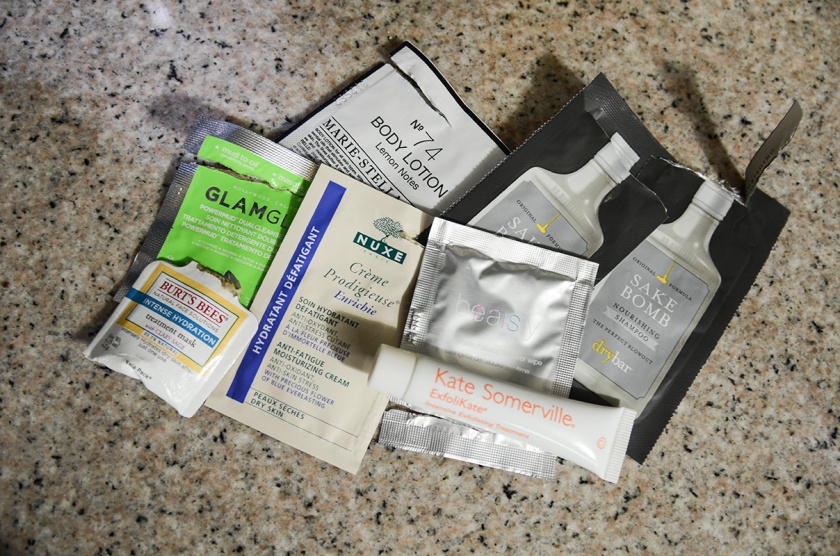 I’ve been doing Sample Stash Sundays for a few years on this blog, and the feature comes and goes, and actually focuses on specific samples at a time. Well, in an effort to destash my samples and keep them from wasting away, I made a dedicated attempt at using them up. But, I’m going to be posting the little reviews in groups. So, we’re going to start back at “No. 1.” Because I said so.

Here’s a look at my first batch of samples, some of which were tried from late last year.

This was honestly a great moisturizing mask, but I am just really averse to creams you wipe away from your face. I just don’t like that sensation. This was very effective in moisturizing my face, though, especially taking care of the dry patches around my mouth area, which regular moisturizers tend to leave dry. Recommend if you don’t mind wiping off product from your face.

This stung the shit out of my face. I don’t know if it’s a coincidence or if my face was just frakking up at the time, but after using this, I broke out like I have never broken out before. (This makeup item is also on my list of suspects, but I’ve been using it for a while and I haven’t had the same bad reaction again.) I read a review on Sephora that claims this broke her out, too, and that she (like me) didn’t get acne very much. Wouldn’t recommend because it hurt my face and broke me out.

Just alright! Nothing to write home about.

I loved this tandem and was very sorry when my pithy packets ran out.

This was very nice and smelled very soothing. Very nice smell to fall asleep to. The moisturizing aspect didn’t stand out so much to me, but it was, on the whole, quite a pleasant cream.

I got this from Angel (Nosy Beauty feature here), who lives in Amsterdam, where Marie-Stella-Maris is from. The lotion itself was a bit runny, which is good for humid climates, but part of me felt like it wouldn’t fare well in cold & dry places. It smelled a bit like it had ginger in it or something! Definitely lemon-y, but I felt like I smelled a bit like tinola, which is a local chicken soup that’s heavy on the lemon and ginger. Haha.

Got this in my RMS order. Quite nice and effective; dreadfully smelled so much like coconut (understandably).

And, that’s a wrap! I’m going to keep using up my samples and report back with my findings. I have been having quite a bit of fun but had to stop with the creams and such when my face decided to act out. I have quite a few makeup samples, too, so those should be exciting.

* Although all samples are technically free (like as GWPs), items marked with an asterisk are PR Samples, as in I did not make a purchase that resulted in me acquiring them.