OK, so I don’t have a lot of MAC products. Before this haul, I had three lipsticks, two non-neutral eyeshadows (Amber Lights and Trax), a lipgloss, a pearlmatte powder, a paint pot, and two brushes. I never go into MAC stores here because looking for colors stresses me out. However, when Laura, a friend of mine from Canada-land, told me that she could help me out by picking out colors and products (at least in terms of color makeup and brushes) she liked, I couldn’t say no—especially not to help and cheaper cosmetics.

So this is what happened.

I got the large double palette, two inserts (eyeshadow and blush), eyeshadow refills, blush refills, a paint pot, three brushes, two eye kohls, and five lipsticks. My sister got four lipsticks and an eyeshadow because she is reasonable.

I posted this picture on my Instagram when Laura was just about to ship these off to me, and it took a while for them to get to me, let’s just put it at that. My notice was postmarked April 24th in the Philippines, so I don’t know why I only got it now (May 3), but that is neither here nor there.

Anyway. So I guess, really quickly, I’ll show you my haul sans my sister’s acquisitions.

Again, you’ve been warned. This is a pretty big one. 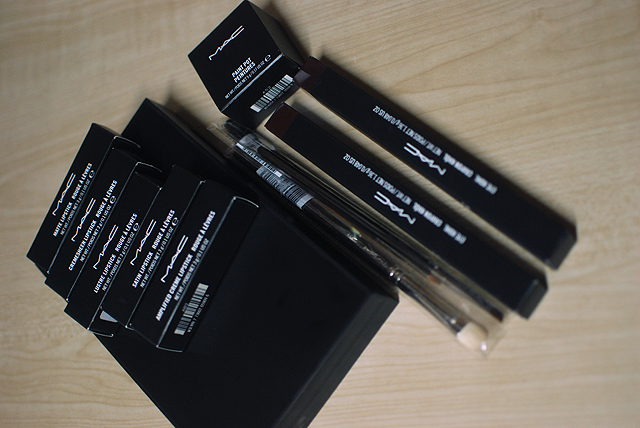 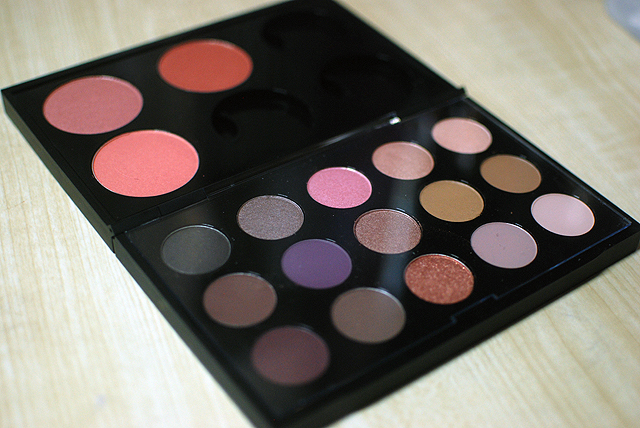 Yay my first MAC palette! If you have been following MAC’s releases, etc. you would already have known that they redesigned their palettes and not a lot of people are happy about that, though some are. I don’t have the previous one, but I quite like this one. I have a 6-blush insert and a 15-eyeshadow insert. You need to buy these inserts separately. 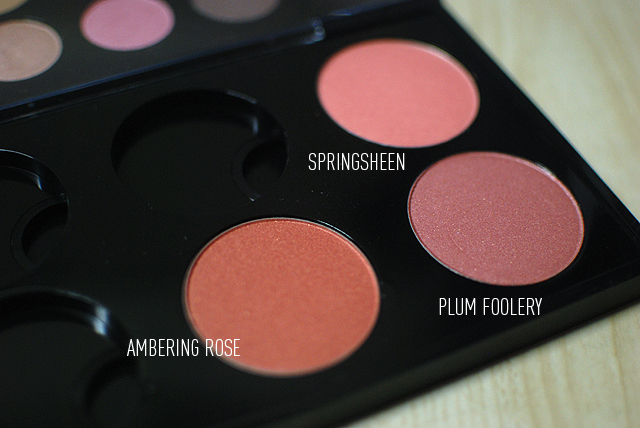 The three blushes I got were Ambering Rose, Springsheen, and Plum Foolery. Again, these are my first MAC blushes so I don’t have any existing MAC points of comparison.

And here is the hodge podge of eyeshadows I got. I’ve rearranged them in a way that makes more sense after I took these pictures.

Although a lot of the popular MAC shades are neutrals, I didn’t want to get a palette full of them, since I already have quite a lot of neutrals. So, I got some “staples” and “basics,” and threw in a bit of color and bling-y colors into the mix.

I got a paint pot in Bare Study, and this is just a picture to compare it with Rubenesque, the paint pot love of my life. Bare Study is a pretty basic shimmery neutral, so I’m rather eager to start using this. 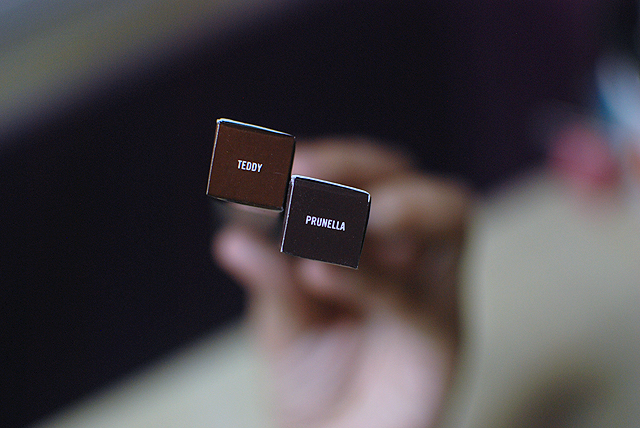 My first MAC eye kohls in Teddy (a basic brown), and Prunella, a dark, dark purple. 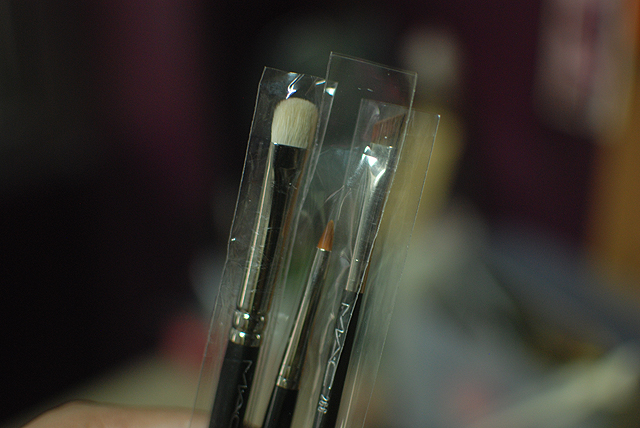 And here be the lipsticks! I know, I know. I could have easily gone over five. But I didn’t. So go me, yes? No? Oh, okay.

I think this is a pretty good variation, though I don’t know why I didn’t get any lighter nudes. More and more, though I realize that I’ve already found my holy grail almost-nude lip color (I’ll get to that in a moment), so I guess that’s OK. I can’t pull of super-pale colors all that well, I’ve decided.

Anyway, I got Ravishing, which is a beautiful summer peachy orange and a Creamsheen. I also got Twig and Mehr, both of which look like a similar dusty rose mauve-y color, though Twig is a Satin and Mehr is a matte. I also got Plumful, which is obviously a plum and it is a lustre finish, which I enjoy. Finally, I got Impassioned, an “amped-up fuschia” with an Amplified Cream finish that is scaring me a little bit. 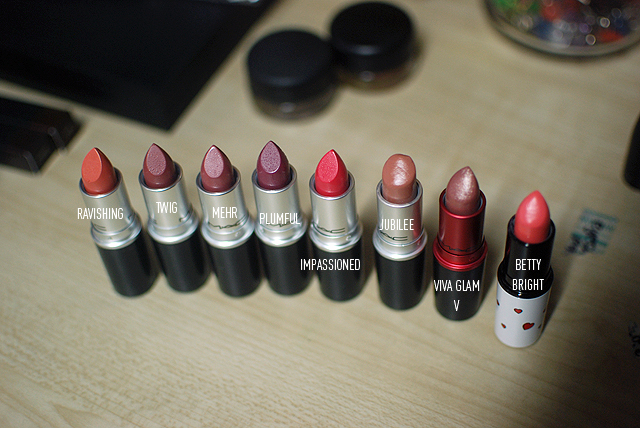 Here are my new lipsticks with the rest of my already-owned MAC lipsticks. As you can probably tell, I love love love Jubilee. I wonder why no one really ever talks about it. It’s ze perfect “everyday” non-concealery nude for me, and the aforementioned personal HG-status almost-nude lipstick.

Anyway, that is that. I hope you enjoyed previewing my consumerist demise. I am seriously considering a makeup no-buy from mid-May until October, and I’m pretty much set on that, I think. I will draw up some rules (though I don’t know what the rules could be, aside from NO BUYING OF MAKEUP) and update y’all soon.

Thank you again to Laura who is all kinds of wonderful and beautiful. 🙂

I bought all of these items prior to making my personal cruelty-free pledge, which you can read about here. MAC Cosmetics is a brand that does not test on animals, except when required by law.